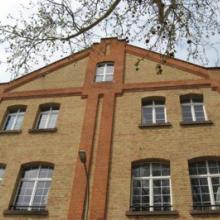 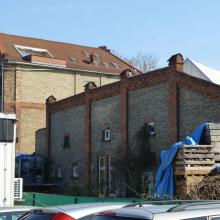 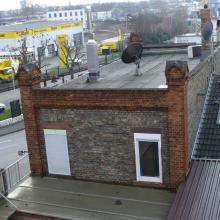 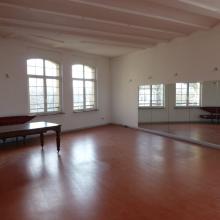 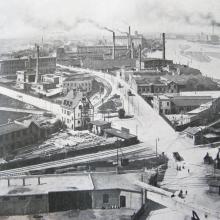 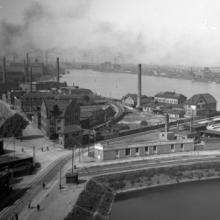 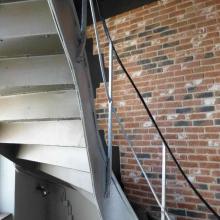 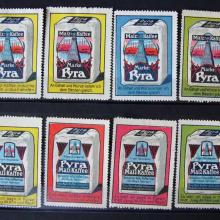 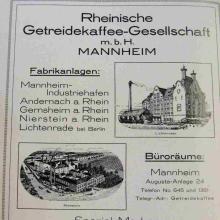 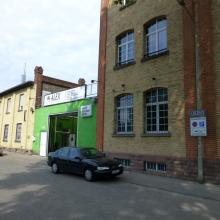 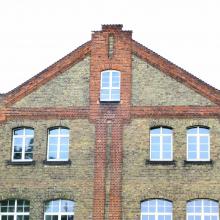 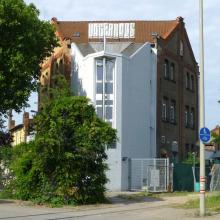 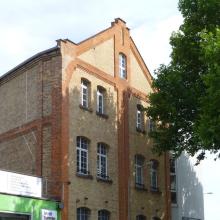 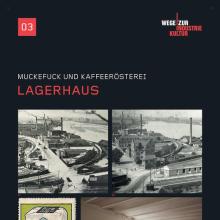 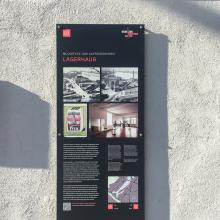 „Lagerhaus” (warehouse) is written on this impressive corner building, now a well-known event venue. The neat brick house belonged to Kaffeerösterei und Malzkaffeefabrik von Valentin Knieriem. In 1906 Knieriem built low production buildings at the end of the Industriestraße. Later, he used his whole site and built the high, narrow house with its pointed roof. A large freight elevator was located where the modern staircase now stands.

Valentin Knieriem’s land was sited at an important traffic junction. The harbour railway ran along the edge of the site, the tram ended on the left. Hundreds of workers alighted here, to go to the nearby Strebelwerke and the Süddeutsche Kabelwerke (cable works). More tracks, which crossed the streets here, lead to the Diffené Bridge and the Waldhof-Becken (part of the harbour).

By the 1920s, the dangerous intersection had been modified. The newly built three-storey house, with its large windows, offered lots of light-filled space. Here, raw coffee and malted barley was washed, polished, sorted, roasted and stored.

Among other products, Knieriem produced "Pyra" malt-coffee, which he called "a highly nutritious and an excellent people’s-coffee-substitute". People called it "Muckefuck" which comes from mocca faux - French for false mocca.

Around 1910, the Pyra-Malz-Coffee became well-known through advertisement stamps. The name "Pyra" refers to the “Pyramid” by the Kaiser-Wilhelm-Becken, which was used as a motif on the stamps. In 1810 the “Pyramid” was built as the northern measuring point of the Mannheim Observatory.

The company was part of the Rheinischen Getreidekaffee-Gesellschaft (grain coffee company) that operated in Nierstein, Andernach and Gernsheim. Also in Berlin, where existing malting houses were used. From the early 1930s, Knieriem’s widow carried on the production for a few years. Then the company Andreae & Co took over the Pyra-Malt-Coffee production until the end of the war. After this, various other businesses moved into the buildings.

The severely neglected building was almost in ruins when, in 1996, it was refurbished and converted to an event venue. This created space for light-flooded offices, a disco, a bar and a dance school. The first floor has been converted into a dance room. The original ribbed ceiling can still be seen.

From 1996 to 2004, the Lagerhaus was the venue for many from the art and culture sector. This is where the first plans were made for the Mannheimer Pop-Akademie. Today, the rooms can be rented for private functions.