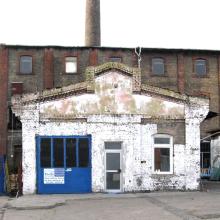 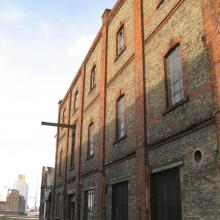 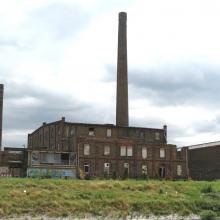 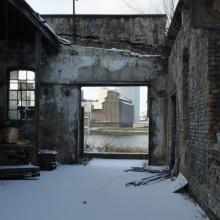 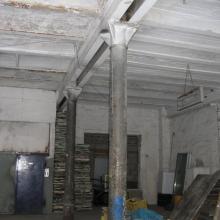 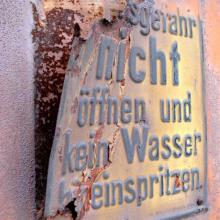 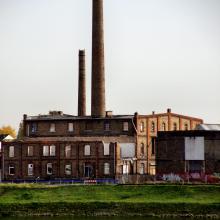 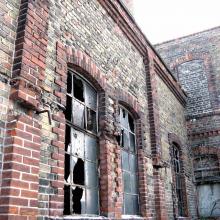 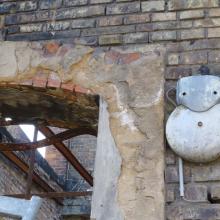 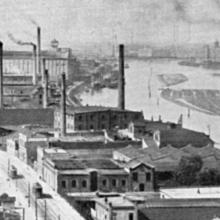 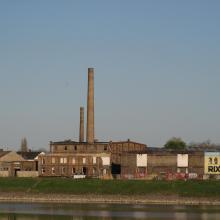 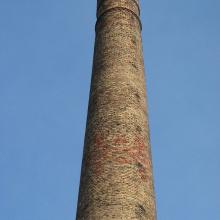 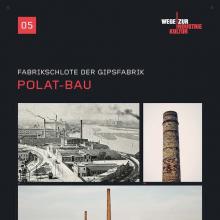 The un-rendered brick building, with its small attached office, seems like something from another age. Its facade is decorated with structured brick patterns, and the two tall chimneys have ornaments made of coloured bricks. Red and yellow bricks have been used in a style typical of industrial architecture in 1900. The facade of the former Bettfedernfabrik (feather-and-down factory)  is designed in a similar manner.

There is hardly a building in the industrial harbour that remains so complete, yet at the same time is so dilapidated.

Within only a short time, the premises built in 1901 for the Rheinische Gipsindustrie (gypsum) found a wide range of uses. These included an artificial leather factory, an artificial silk factory, a pressed-yeast and a spirit factory. In 1913, Charles Renninger joined with his bottle-crate factory, which was previously in the Lagerstraße 9. During the First World War, he produced firing-pins for shells and cartridge cases. In 1925, he changed from steel to chemical products and from then on produced anti-corrosion paints. In 1933, he was appointed Mayor by the Nazis, a position which he held until 1945. He used this position to act with extreme harshness towards political opponents and Jewish citizens. The NS-Economic Group of Chemical Industries elected Renninger to head the expert-group Mineral Paints. Renninger was able, in times of the war economy, „to successfully represent the interests of our cartel” in the allocation of raw materials. (Renninger 1951).

The water side shows clearly that it is not only the ravishes of time that are at work here. Looking at the buildings, it is obvious that they have been converted many times. The property, with its changing tenants over decades, was owned, first by the Rheinische Industrie-Gesellschaft mbH (industrial company) and later by the Grundstücks-Gesellschaft mbH (land company). Most of the tenants became insolvent in a relatively short time. Even the tenant Charles Renninger was in debt in the early 1930s. Only after his death in 1951, did his son buy the property and leased all of it.

From the 1950s, several tenants operated their companies on the site: a removal company, a glass and window manufacturer, a mineral mill, a palette factory, a car repair shop and a building company. A fire later completely destroyed the roof.

Since 2010, the property has been owned by Hoch- und Tiefbau-Unternehmer Polat (building and civil engineering contractor).

In a photo from 1909, the three-storey building, which was used at the time as a grain-yeast factory, towers over the neighbouring buildings. Both chimneys still exist today. In the middle of the industrial harbour, the timber market on the river can be seen. On the right is the Pfälzischen Mühlenwerke (mill), in the foreground the workshops of the structural and civil engineering works Spangenberg.