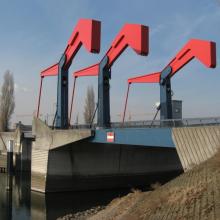 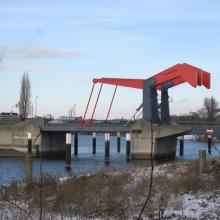 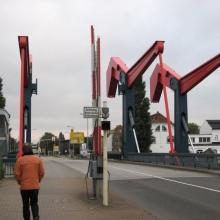 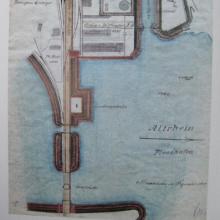 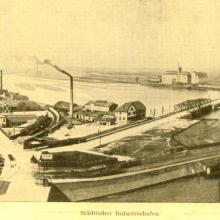 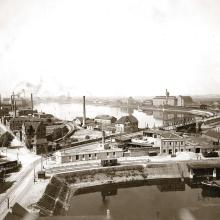 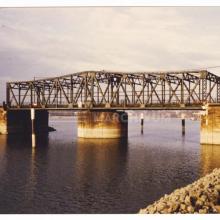 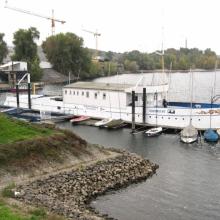 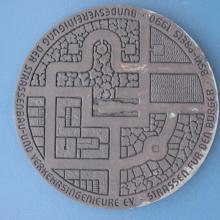 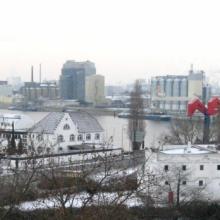 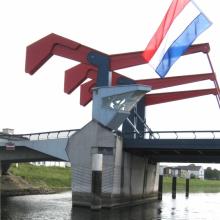 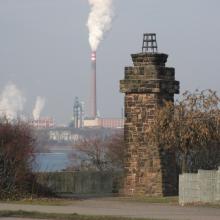 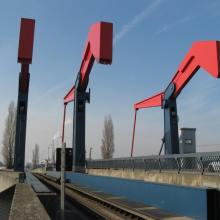 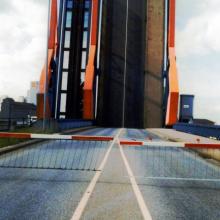 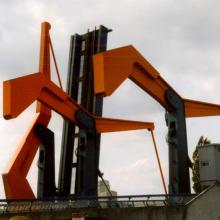 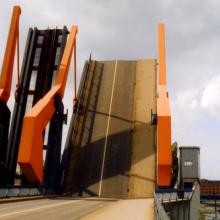 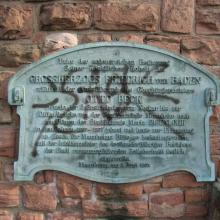 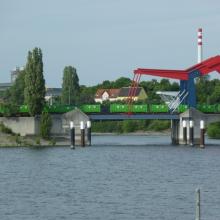 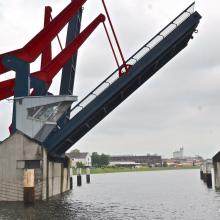 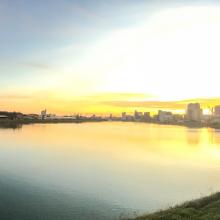 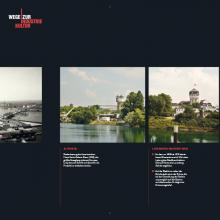 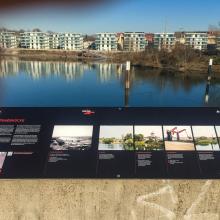 It is an amazing sight, when the three red heads are lowered and the two Diffené Bridge bascules rise slowly to let a ship pass. The bascules are made of steel, each 28 metres long. They are raised to an angle of 82 degrees by remote control, powered by three electric motors, each with a capacity of 120 hp. In an emergency, the bridges can be operated from the bridge cockpit. Nowadays, the bridge is only opened for traffic when the water level is very high.

Up until 1988, a swing bridge stood where this bascule bridge, with its counter-balance beam, now stands. The swing bridge was built between 1902 and 1903 as a steel truss structure by the company Grün & Bilfinger and the Brückenbauanstalt der MAN (bridge-building institution) in Mainz-Gustavsburg. After a total of 15,000 rotations during the period 1912-1956, the bridge could no longer cope with the trams and the heavy traffic. The new road bridge was set higher up, frequent bridge openings are therefore no longer necessary.

A sandstone pylon, built in 1907, has been preserved. It now stands at the side of the bridge on the Waldhofbecken (Waldorf basin) side. Inscribed on it, is a dedication to the initiator of the industrial harbour, the Mayor Otto Beck, and to the builder, the city architect Moritz Eisenlohr. The bridge is named after Philipp Diffené (1833-1903). He was president of the Chamber of Commerce and wholeheartedly supported the construction of the industrial harbour.

This shows an aerial view from 1927. To the right of the bridge, is a rectangular river swimming-pool with white walls. Directly beyond it, is what is known as the ‘Bastion’, a projecting area with four concrete pylons at the corners. Of these only one remains today.

Images of the panorama

1 The Old Rhine and the mirror factory This is where sand was unloaded for the glassworks Saint-Gobain Glass (1853) which was known locally as "The Mirror". This branch of the French company was the largest cast-glass producer in Europe.

2 Waldhofbecken with the Wasserturm Luzenberg (water tower) The entrance to the Waldhofbecken. Coal was unloaded here for the former gasworks. Remains of the gasworks can be seen from the Hafenstraße. In 1914 the Luzenberg-Schule (school) was built adjoining the water tower, under the direction of City Planning Director Richard Perrey. This tower was in use from 1909 until 1979.

3 Diffenébrücke and Brillux The new Diffenébrücke has been in operation since 1987. The huge red booms that lift the bridge are the landmark of the modern industrial port. The distribution department of the paint factory Brillux is situated in a building that used to be a butter factory.

6 The companies on the "Russenkai" (The Russian Quay) The south-eastern shore was named the "Russenkai" after the battle in 1814 between Napoleon and the Prussian and Russian troops. We can see the following factories: Polatbau, a former gypsum factory (1902); Salzkontor, formerly the Weill Röhrenhandel (tube factory) (1911); the Gewerbepark Kungl (commercial park), formerly the Pilo shoe polish and glycerine factory (1903); Hafenpark, formerly a feather-and-down company (1905), and Hutchinson (1900).