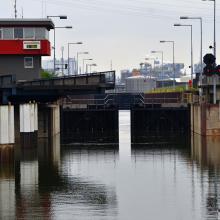 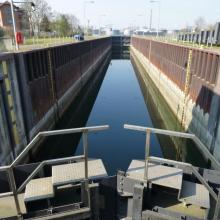 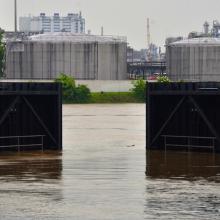 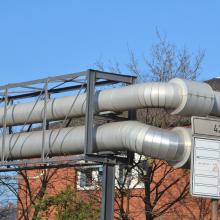 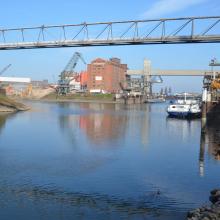 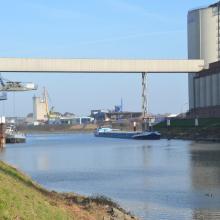 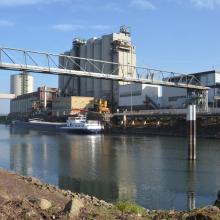 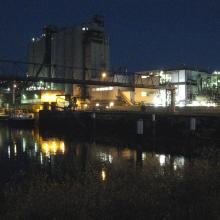 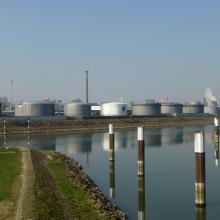 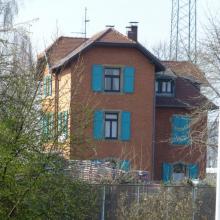 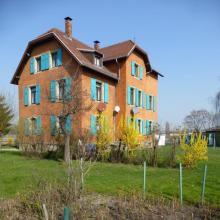 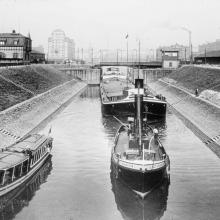 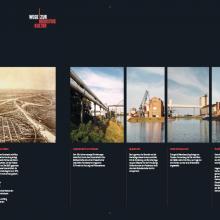 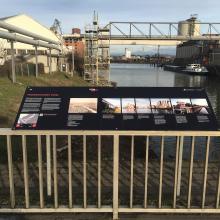 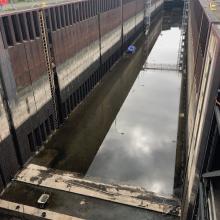 The Friesenheimer Island and The Pound Lock

Today the Rhine is 81 km shorter than it was in 1817. At that time the engineer Johann Gottfried Tulla began straightening the meandering course of the river. Several cuts were made to reduce flooding and the hazards of freezing-over. Wetlands contaminated by malaria were dried and the river traffic speeded up.

In 1862, after 35 years of work on the construction site to the north of Mannheim, 4,590 metres of the new Rhine could be used by shipping. The agricultural area that had been cut off was now an island. This land originally belonged to Friesenheim on the left bank of the Rhine. Today the Friesenheimer Insel is part of Sandhofen.

The remaining Altrheinschleife (Old Rhine loop) was first of all used as a harbour for timber logs. Then, in 1856, a mirror factory settled in Waldhof next to the river. It was followed by several other businesses such as the chemical company Boehringer in 1872, and the pulp mill in 1884. As industry in Mannheim became more and more important, new industrial sites were urgently needed. In 1895, the city bought the Friesenheimer Insel, with the intention of creating an urban industrial harbour. In 1897, the company Philipp Holzmann started work on the eastern bank of the Altrhein (Old Rhine). In 1903, the western side was developed by the company Grün und Bilfinger and the Diffené Bridge was built. By the time the area was officially opened on the city's anniversary in 1907, it was an achievement to be proud of: over one million square metres of valuable new terrain, all buildings supplied with electricity, fresh running water and a waste water system. For the transport of goods 26 km of railway tracks had been laid. Tramlines as well as almost 10 km of roads were complete.

Long-distance steam pipes Since 1964, massive pipes have been laid above ground, running through the industrial harbour. The waste-to-energy plant on the Friesenheimer Insel provides ‘long-distance steam’ for a total of 50 companies for heating and process heat.

Rhenania Lagerhaus (warehouse)- now Rhenus The old storage warehouse for grain and the crane system are now only used for the unloading and the temporary storage of oil seeds for the company Bunge. The oil-seed is transported via a conveyor belt high above the Bonadies Harbour

The headland at the Kaiser-Wilhelm-Becken Thyssen-Sonnenberg’s large metal recycling plant has been here since the mid-1980s. Before that coal was stored here and there was a briquette factory.

Verein Deutscher Ölmfabriken - now Bunge Deutschland Next to the dominant modern silos and the new pressing plant, the old silo with the naked concrete silos and the red brick walls presents a fascinating example of industrial architecture from 1929.

The lock and the control room When the water level is high, the bridge is turned sideways so that boats can pass through the lock. For decades, the 1898-built lock was operated directly on site. The lock keeper lived, together with the "lock servant", in the two-story brick building overlooking the Neckar. The lock has been electronically controlled from the Port Authority’s headquarters since 1998.

Lock and views of the Neckarspitze There is only a gradient of 30 cm between this point and the point where the Old Rhine flows into the Rhine. The lock is therefore needed to overcome this gradient. Without a lock the Old Rhine would silt up too quickly. The confluence of the Neckar and the Rhine are set against the backdrop of the oil storage tanks on the "Neckarspitz" and BASF, the largest chemical manufacturing plant.